Blog: Shame and the Social Contract

Originally published in this winter’s hardcopy issue of Ascent, the Backcountry Snow JournalNot long ago, I heard a story from an old colleague of mine. It was his first year as an avalanche professional and he was out in the field with his supervisor. The two of them approached the top of the ridge and peered onto the slope below. It was snowing and visibility was not good. Still, they had seen avalanches run for most of the day. “I’ve never seen this slide before,” said the old hand, “why don’t you go first?” My pal shrugged his shoulders and dove in. Minutes later, after the boss frantically skied down the bed surface and pulled snow from the rookie’s blue face, the boss whispered, “You’ll mention none of this to anyone.” As it turned out, the secret held…but only for a week. The rest of the avalanche team heard about it second-hand through mutual friends at a party. Trust and respect went out the window, as did professional courtesy and communication. The team took years to recover.In 2015, Alan Jones, a senior engineer at an avalanche engineering consulting firm, and Bruce Jamieson, a professor of civil engineering at the University of Alberta in Calgary, and, not coincidentally, one of the leading avalanche-related researchers in Canada, published a paper that looked at risk, vulnerability, and avalanches. In their paper, The Effect of Under-Reporting of Non-Fatal Involvements in Snow Avalanches on Vulnerability, they estimated – through a couple different methodologies – that only one in ten non-fatal avalanche involvements was reported. Let me frame this a different way: 90% of non-fatal involvements never get reported.Which leads us to two important questions: Why is this?…and What’s the fall-out?Even though the more important question is Why is this?, the second part of the question is easier to answer. The fall-out is two-fold. First, let’s look at some numbers. Last winter, according to the Utah Avalanche Center, 51 people were caught in an avalanche and 2 were killed. A lot of statisticians will be waving their arms around…but let’s just keep it simple for a moment. Based upon these numbers, if you were caught in an avalanche last winter, one might infer that you would have a 3.9% chance of getting the axe. By applying Jones and Jamieson’s numbers, however, it would appear that you really only had a 0.39% chance of getting the axe. In effect, one of the side-effects of under-reporting is that it makes avalanches appear to be way more dangerous than they are. Maybe this is good news?The second part of the fall-out has to do with what the economist James Surowiecki refers to in his book, The Wisdom of the Crowds. Simply put, he argues that the collective wisdom of the people is often more accurate than the expert. Avalanche centers put out a daily avalanche forecast based upon a number of snow, weather, and avalanche factors. Adding in their experience and expertise, they come up with a single word danger rating for the day. Considerable. Or another day, maybe it’s Extreme. Maybe another day, the danger is Low. Any of these arm-waving statisticians will tell you that more data (a higher “N” – count) will necessarily lead you to a more accurate answer. What if the forecast center had 90% more data than it might otherwise have? As the old saying goes – with the forecasts, the avalanche center is always right…. but you can help them be more right. Observations, data, snow profiles, videos, and reports of involvements…all this information helps to save lives.Back to the 1st question: Why is This?For most of us, connection….being part of the fabric of the community is important. We yearn for the trust and respect of our backcountry partners, friends…even loved ones. And this is central – even foundational – to how we see ourselves and dare-I- say-it, “where we fit and stack up in the community.” Reputations take a lifetime to develop, and only a few minutes to destroy. One of the things that rips apart the fabric of the community is something called Shame. What is Shame? The TedX darling and PhD-holding social worker Brené Brown describes Shame as “the intensely painful feeling or experience in believing we are somehow flawed and unworthy of acceptance and belonging.”I lived in Japan in the early 1990s for a few years and noted that shaming and exclusion from the family, from the fabric seemed to be the most severe type of ‘punishment’. It gets you thinking – these ideas of honor, identity, ego – which then may lead back to how shame was described before. Shame, however, is perhaps more brutally used as a verb – as in “to shame someone”. And when someone is shamed, what happens to that person’s psychology, that person’s reputation? When I gave a presentation about crowd-sourcing and backcountry observations in front of 450 people in Jackson, Wyoming this fall, I asked the crowd to raise their hand if they knew someone else that had been in an avalanche involvement and failed to report it – to their loved ones, their friends, or the avalanche center. Over 50% of the hands went up in the room. When I asked why, the answers were clear: loss of respect, fear of reprisal, loss of their place on the soap-box, fear of losing their job, Shame.  They feared the second guessing and the contempt.  Now we move on from Why is This….to…How do We Fix it?In his book Just Culture, Sidney Dekker describes how teams, cultures, communities, and families often subscribe to the “bad apple” theory. It’s clean, efficient, quick, and wrong. It’s a quick-fix of an un-just culture that castigates the individual rather than looking at the environment and social norms of the culture. What this takes, rather, for a just culture, is a social contract: a contract between the individual and the community.For the individual to           Be open and honest about close calls and near-missesThe community must do much of the heavy lifting:            View involvements as free-lessons and opportunities to learn.

Starr Jamison suffered the agony of watching a good friend die in an avalanche in Colorado. He was one of three friends she lost to avalanches in a single year. In this episode, Starr describes the first accident and the painful, disorienting aftermath, how she recovered, and how she’s working to help others deal with similar experiences.

Click here to read the Colorado Avalanche Information Center’s report on the incident discussed in this episode. And here’s a link to the Survivors of Outdoor Adventures and Recovery website that Starr created.

A podcast from Accidents in North American Climbing

Each month, the Sharp End brings to life stories from the pages of Accidents in North American Climbing, the annual publication of the American Alpine Club (AAC). Host Ashley Saupe interviews the climbers and rescuers involved in life-threatening incidents and shares their lessons, helping all of us become safer climbers. Join the more than 20,000 climbers who listen to the Sharp End by following along on iTunes, Spotify, Soundcloud, Google Play or Stitcher. New episodes are shared the 1st of each month! 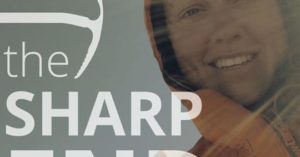 There is a saying often repeated among people who skydive, bungee jump, white water raft or take part in other adventure sports: “We take risk not to escape life but to keep life from escaping.”

This phrase that encapsulates the adventure sports subculture also shines a light on the disconnect that can occur between counselors and their clients who participate in adventure sports, says Colin Ward, a practicing counselor, counselor educator and mountaineer. Read more